Healing Stones for your Chakras 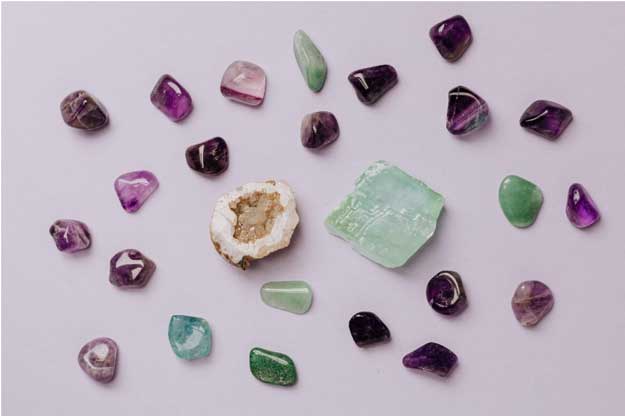 Chakras are energy centers in the body that can lose their balance and cause disruptions in a person’s mood. Spiritual experts believe that chakras play a crucial role in grounding or overwhelming a person in the face of challenges. Chakra experts use natural stones to realign energy centers in people to help them recover from any form of emotional or mental turmoil.

Even though chakra healing is an alternative healing method that’s not found in mainstream patient care, people are starting to test it. This holistic energy treatment exposes specific points in the human body to natural stones to adjust the energy level of chakras. The spinning wheels of energy or chakras in the body regain power from the gems they are exposed to.

A person starts to feel calm and composed after the balance of their chakras is restored. Since the human body has seven spinning wheels of energy, different stones are used to treat them individually. Using the right stone is essential when healing chakras; otherwise, the energy wheels will not respond to the stone as they should.

Here are all the stones that are used to heal the seven chakras:

The First Chakra: Root or Base
The first chakra represents passion and feelings of being grounded. If it is disrupted, a person may feel unmotivated and lost.

Stones used to heal the Root
Red stones such as ruby, bloodstones, and red jasper are used for treating the first chakra. A chakra expert places the chosen stone between the patient’s thighs near the groin and asks them to think about feelings represented by the red color, such as warmth, love, or passion.

The Second Chakra: Sacral
Sacral represents a person’s creativity and ability to accept others. If it’s disturbed, a person may feel confused and overly clingy.

Stones used to heal Sacral
Carnelian, dark citrine, orange aventurine, orange calcite, tangerine quartz, or any other dark orange stone is typically used to repair the second chakra. The chakra expert places an orange stone two inches below the patient’s navel and asks them to think about encouragement and creativity.

The Third Chakra: Solar Plexus
The third chakra represents a person’s intellect and how they see themselves in the world. If it is disrupted, a person may feel a lack of self-esteem and confidence.

Stones used to heal the Solar Plexus
Yellow crystals such as citrine and amber are used to treat the third chakra. A chakra master places a yellow stone two inches above a person’s bellybutton and asks them to think about the color yellow or the sun or expressing yourself.

The Fourth Chakra: Heart
As the name suggests, the heart represents a person’s ability to love unconditionally and accept others. If it loses its balance, a person may feel jealous and bitter for no apparent reason.

Stones used to heal the Heart
Any green or pink stone such as malachite, green tourmaline, emerald, rose quartz, ruby, etc. are used to balance the energy in the fourth chakra. The chosen stone is placed on the patient’s breastbone, and they are asked to think about opening their heart and loving others.

Stones used to heal the Throat
Typically, blue crystals such as blue sapphire, aquamarine are used to treat the fifth chakra. A bluestone is placed on the patient’s larynx, and they are asked to think about positive speech and articulating thoughts.

The Sixth Chakra: Third Eye or Brow
The sixth chakra represents a person’s ability to see the big picture and understand things differently than what they apparently seem. If it’s disturbed, a person may experience white noise and fogginess in their minds and a lack of clarity in thoughts.

Stones used to heal the Third Eye
Purple or indigo stones such as obsidian or amethyst are used to restore the balance in the sixth chakra. A healer places an indigo colored stone between the patient’s brows and asks them to think about clearing the mind and concentrating on thoughts.

The Seventh Chakra: Crown
The seventh chakra represents a person’s ability to pick divine inspiration. If it loses its balance, a person may feel lost and unsure of their purpose in life.

Stones used to treat the Crown
Violet colored stones such as clear quartz and light amethyst are used to heal the seventh chakra. The chosen violet crystal is placed on a person’s head, and they are asked to think about a supreme authority or divine deity.

Chakra healing has helped numerous people regain their composure and overcome their inner demons. I believe that if sought with sincerity, chakra healing therapy can work wonders for people in distress.

Just as Reiki and Christianity are often linked together, people try to make a connection with chakras and religion. However, chakras exist outside of any religion; some religions might support the concept of chakras and their healing through stones. But chakra healing is a therapy that people from all walks of life can enjoy regardless of their religion.

If you are struggling in life and want to heal naturally, then contact our reiki and chakra experts today and become the best version of yourself.

Reiki 101: What is Reiki and How Can You Learn?
How Modern Medicine Uses Reiki